Call Of Duty: Modern Warfare 2 Finally Has A Release Date

Activision Blizzard and Infinity Ward have finally revealed the release date for "Call of Duty: Modern Warfare 2." The teaser trailer revealed on Tuesday mentions an October 28, 2022, launch for the upcoming game but doesn't say anything about platform availability or other gameplay elements. Despite Microsoft's planned acquisition of Activision, the software giant has promised that the in-development "Call of Duty" games will still be available on Sony's rival PlayStation platform, too.

The short blurb for the trailer confirms that familiar faces like Simon "Ghost" Riley, Kyle "Gaz" Garrick, and John "Soap" MacTavish, among others, will be featured in the anticipated title. The game is also set to introduce Mexican Special Forces Colonel Alejandro Vargas as one of the key characters. While devoid of actual gameplay details, the trailer offers a glimpse of the photorealistic graphics that excited fans can expect from the game.

And just to avoid any confusion, this isn't a reboot of the 2009 title of the same name, but a sequel to the Modern Warfare game that was released in 2019, which turned out to be a critical and commercial success for the studio. At this point in time, Activision and Infinity Ward are tight-lipped about what they have in the "Modern Warfare 2" pipeline, but there are a few juicy rumors floating around.

What to expect from the next Modern Warfare entry 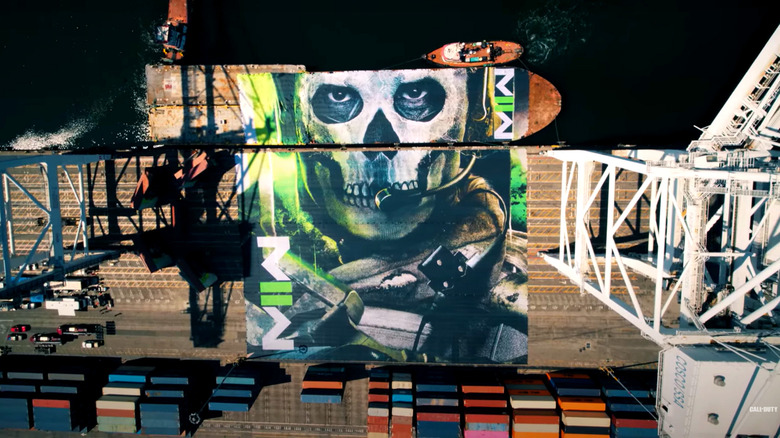 According to a report from VGC, the upcoming game will be centered around U.S. special forces operatives going against Colombian cartel runners in a covert war. A leaker going by the username @RalphsValve tweeted what looks like internal presentation material or game UI, which tips something called a new "Moral System" for the game. The latter will reportedly arrive as some form of moral compass that will take into account a player's actions and accordingly unfold the story for them.

A more recent leak from Eurogamer suggests that "Call of Duty: Modern Warfare 2" will feature a new mode called DMZ inspired by the extraction-style elements borrowed from the acclaimed RPG "Escape from Tarkov." Aside from the usual solo mode and multi-player fare, a mysterious third mode is also said to be in the pipeline. Leaks also suggest a new gun inspect feature arriving with the highly-anticipated game, and there's also chatter that fan-favorite maps such as Quarry, Afghan, and Highrise are set to make a return.

Activision has already made some bold proclamations about "Call of Duty: Modern Warfare 2," hyping the game in its Q1 2022 financial results as "the most advanced experience in franchise history" during the company's earnings call. Work is also underway on a new "Call of Duty" mobile game called Project Aurora that will build on the battle royale experience with faster-paced action. The game is currently in the closed alpha testing phase, but there is no release date attached to it yet.