The metal enclosures around the hinge on Samsung's next phone-tablet hybrid are noticeably slimmer, giving it a cleaner look. Interestingly, the courtesy of a refined hinge aesthetics is also being extended to the Galaxy Z Flip 4, as well. In another tweet, the same leakster also shared purported images of the cases made for the upcoming clamshell foldable, adding that the hinge part has "become very narrow."

Samsung hasn't shared any information about its upcoming foldable phones, but if the launch window of Galaxy Z Fold 3 is anything to go by, we can expect an official reveal to happen at an Unpacked event around August. In typical Samsung fashion though, leaks have already spoiled all the major surprises way ahead of the official launch, unearthing everything from design schematics to the core specifications of the unreleased foldable phones. 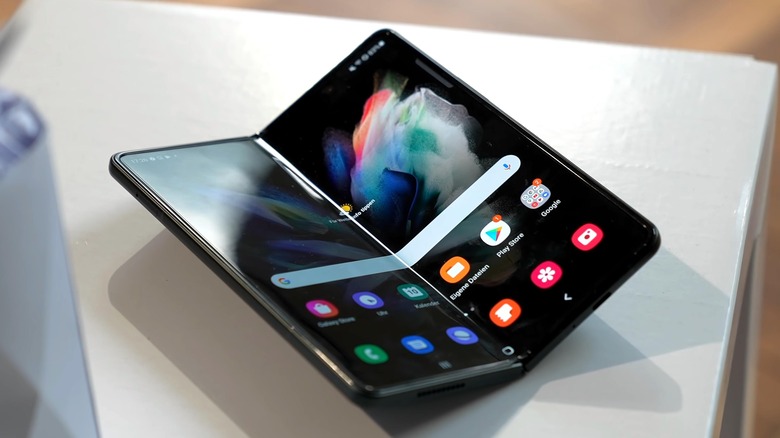 Starting with the Galaxy Z Fold 4, alleged product renders have imagined a refined appearance, thanks to the floating camera lens design that we last saw on the Galaxy S22 Ultra. As for the Galaxy Z Flip 4, leaked images suggest it will look identical to its predecessor, retaining the same dual-tone glass build with a pinch of color thrown in to jazz up the looks.

Coming to the innards, Ice Universe claims that the Galaxy Z Fold 4 will pack a 7.6-inch foldable AMOLED screen with a 120Hz refresh rate, while the cover display measures 6.2-inches with the same refresh rate figures. Qualcomm's fresh-out-of-the-oven Snapdragon 8+ Gen 1 will power the device, paired with 12GB of RAM and a choice between two storage options — 256GB and 512GB. The primary rear camera has been upgraded to a 50-megapixel sensor, sitting alongside a 12-megapixel ultrawide camera and a 10-megapixel telephoto lens with 3x optical zoom output.

The snapper on the inner foldable screen is a 4-megapixel unit, while the selfie snapper atop the cover display employs a 10-megapixel sensor. The battery capacity remains the same at 4,400mAh, while the charging wattage is capped at 25W. As per tipster Yogesh Brar, the Galaxy Z Flip 4 will employ a dual 12-megapixel camera setup at the back, while the inner foldable screen is a 6.7-inch FHD+ Super AMOLED screen with a 120Hz refresh rate.